The expression ”envelopes” determines the volumes containing the cell hosting material. The envelopes may be filled with a suitable material for a specific task. In the current CellCore bioreactor the matrix is a 3-dimensional scaffolding environment based on non-woven PET fibre material. Each envelope is circular with a hollow centre being the fresh media inlet and the circumference being the used media outlet. As the media pass through the matrix and not along the matrix external surface limited gradients are not created - CellCore is operating gradient free. The scaffold/matrix discs are stacked (in parallel sets of two). CellCore technology is fully scalable from few ml until production size of 15,000 ml total envelope volume. 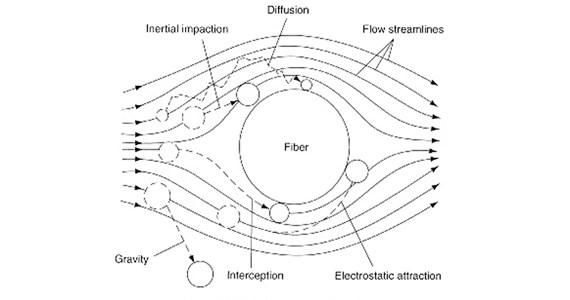 One of the major differences between CellCore and traditional micro and fiber carriers is the fact that the media pass through the CellCore scaffold/matrix and not along the matrix body, sheet, discs or surface. For traditional micro and fiber carriers the media pass stochastic around or along the porous bodies. Separation of the cells from the media during seeding is depending on forces and separation mechanics between the cells surface and porous body surfaces. As the open cavities, space between the traditional porous bodies range millimeters traditional separation mechanics (sieving, deposition, collision, adhesion) do not support cell separation from through passing media. Plasma discharge treatment of porous bodies is needed and facilitates attraction by charge adhesion of adherent cell lines.

For CellCore technology the media is forced controlled and evenly through the entire porous body, the matrix being a scaffolding 3D environment. And hereby the freedom to separate any desired cell (particle) size and adapt to their specific characteristics. Important features of CellCore technology is:

Mammalian cells range generally between 10-20 µm in size though with quite different surface characteristics between adherent and suspension cell lines. CellCore bioreactor platform is available in two specific variants – one for adherent cell lines and one for suspensions cell lines.

Particles are captured within the depth of a porous media as the fluid follows a tortuous flow path created by the series of interconnected void spaces formed by the micro filter structure (e.g., fibers, membrane, etc).  Each time the fluid flow around the micro structure, or though a porous opening, particles have an opportunity to deposit onto the structure primarily by the capture mechanisms shown in the above illustration.

As the fluid flows around the structural elements, particles can be primarily removed from the fluid stream via the particle collection mechanisms of diffusion, interception, inertial impaction and electrostatic deposition.  Lesser importance mechanisms include sieving and gravitational sedimentation.  The particle capturing effectiveness of each mechanism is primarily dependent on the particle size, fluid velocity and size of the filter structure (e.g., fiber diameter).

Diffusion
Particle deposition via diffusion results when particles collide with the filter structure due to their random Brownian motion.  This random motion (zigzag path) occurs when small particles collide with fluid molecules, thereby altering the particle trajectory around the filter structure.  This motion, and hence the degree of particle capture, becomes more pronounced as the particle diameter becomes smaller, especially for particles less than 0.1 mm

Gravitational Sedimentation
Large particles (i.e., larger than 10 mm), at relatively low velocities, can be captured via gravitational sedimentation if sedimentation causes the particle to deviate from its original path and come into contact with the filter structure.